Having caught a late morning taxi to the Dubrovnik port we boarded a flash ferry to Hvar. The third stop on this boat trip, it was different kind of destination. Our itinerary described this spot as being “amazing beaches, nightlife and water sports”. Hvar felt like an expensive party town. Expensive food and drink, plethora of bars and cafes, luxury yachts and sailboats and a plethora of hedge fund managers and cashed up party boys.

We straight from the itinerary and stayed at the nearby Pharos Hotel. A trendy hotel on the hillside, 10mins walk away from the tourist areas. Night one, by the time we had arrived it was about 10pm,so we ate in the bar area. I had a calamari, which was very good. As a group we ventured to a rooftop bar, which would have been great were it not for the 4 brick walls surrounding the terrace. Once our team retired to bed, John and I made our way to Carpe Diem. A bar recommended to us. We didn’t stay long, expensive drinks and minimum spend areas was enough to put us off. We merrily wandered to another local bar with a better atmosphere and prices. We met some local revellers who later invited us to join them at a local Jazz Club. We were told that this bar was for the local tourist workers and was full of Croatian in what felt like a prohibition bar. It felt like that having walked through a non descript door in the back alleys of Hvar, a place where the barman increased the price of my drinks on the fly, but they were still cheaper than anywhere we had been. We made it to bed at 5am. 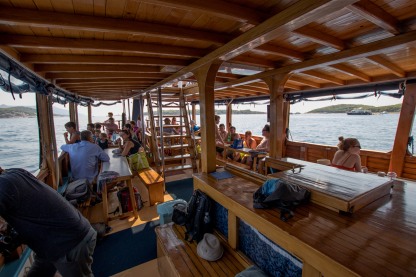 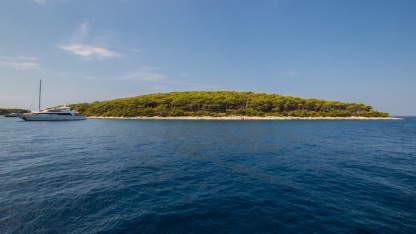 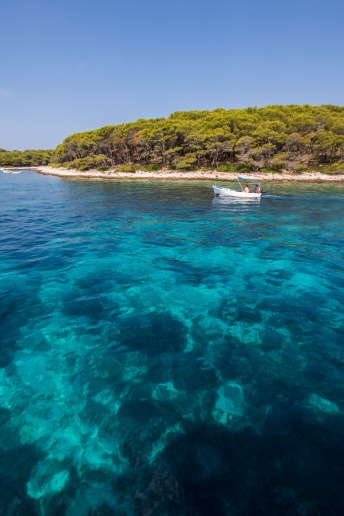 Our first full day on Hvar started at the port. Our tour group headed out on the boat with approx 50 other guests to nearby islands and lagoons. We had sea breem on the boat caught that day, and some had the chicken. It was fine for the 50K we were billed with free choice of orange soda or white wine. 3 hours of free time allowed us to walk to other parts of the island, with further hotels and restaurants. The presence of them however was discreet and didn’t take away from the secluded feel. Sitting on some rocks next to the clear blue water, I managed to attract half a dozen wasps with my can of cider prompting a mass exodus of our group back to a bar near the boat for one last drink. The boat took us to one more lagoon for an hour of jumping in the water and beachside relaxation. The constant presence of sea urchins did nothing to deter anyone from going in the water. I however am. Now motivated to buy some diving shoes for my next adventure, if only to help traversing all the razor blade sharp rocks at the water edge. 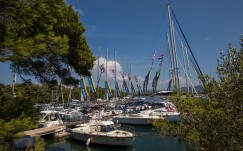 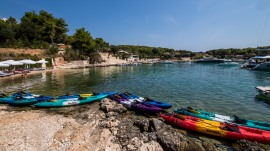 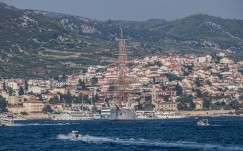 Evening dinner in Hvar was at Konoba Bonaca. The waiter who seemed to have existing rapport with Zoran, treated us to some grappa after which John and I indulged in the cold seafood plate. Shrimps, baked octopus, sea bass, carpaccio sword fish and shark. Smallest and least inspiring shrimps I’ve ever seen, but the carpaccio sword fish was excellent. Home made Panna cotta wrapped it all up nicely.

We visited a bar in the west end of the promenade called Hulla Bar. An open air water side bar filled with drunk western visitors, girls scantily clad, loud music, an assertive ordering system (there is no turn based system, shouting at the bar persons is the trick), and the constant threat of drinks being sprayed over the dancing patrons. Maybe 10 years I would have enjoyed this, but I’d basically arrived at my nightmare. We stayed for one drink, met our friends from last night then walked them back to the city, until our turnoff and then retired to bed. The temptation to go out again with a 6am start was non existent.

Moved to Perth in October 2014. This is my photo travel blog since then. View all posts by charlieljay